With Matthew Naus’ permission, I collected some posts from his facebook page. Thanks to Matt for having the courage to face up to the evidence which so many cannot face – or, alternatively, want to divert attention away from… See Matt’s website at www.ts911t.org and his facebook page www.facebook.com/gro… 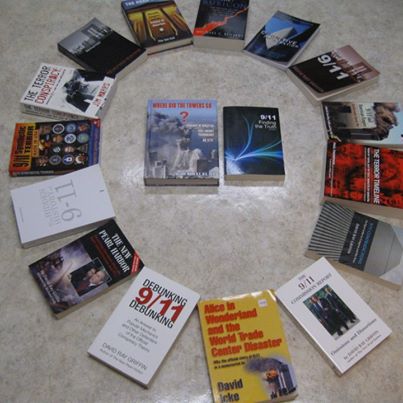 As you can see I read many books about 9/11 searching for the truth. Over the years I found 2 books that really stood out among the many that are out there.

Here’s Dr. Wood’s PowerPoint presentation she did on my TV show called MEET THE TRUTH on June 29th, 2012. This show is entirely Dr Wood presenting her information with only a few interjections by the host and is just over 2 hours long. An important part to watch and listen to in the first 20 minutes of this presention are the firemen who lived through the destruction of one of the towers in Stairwell B. www.youtube.com/watc… Not much to say about this individual since he doesn’t have much to say about real empirical evidence. I Sponsored Dr Bob Bowman for speaking events for two years in a row in my hometown of Milwaukee, WI. There won’t be a third time. 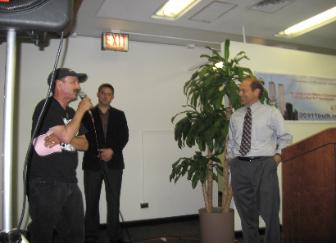 Then just as Dr Judy Wood is beginning to get her evidence out there in 2007 filing court actions they give this psyop engineer a new life as the founder of Architects & Engineers for 9/11 Truth to divert attention away from her valuable empirical evidence. Again, how little did I know at that time when I had this picture taken presenting him an Investigate 9/11 cap at one of his speaking events in Chicago in 2008.

I sold Richard Gage Dr Judy Wood’s book "Where Did The Towers Go?" when he observed I had it between the front seats in my mini-van as I was driving him from Milwaukee to Chicago in April of 2011 for his next speaking tour event. He asked me if he could buy it, and I said yes, even though I had not finished reading the book. I was his organizer for this 10 city speaking tour event in April of 2011. It was a few weeks later I found out his organization’s volunteers had been using a vetting process for new signers (architects & engineers) that would look to see if these new signers had anything in their bio or on the internet in relationship to Judy Wood or DEW. This was a no-no for this organization. Now I have to wonder, why did he want to buy Dr Wood’s book if he was so against her research by instructing those volunteers (vetter) who worked for the organization, Architects & Engineers for 9/11 Truth, and who researched new signers to watch out for Judy Wood and DEW. 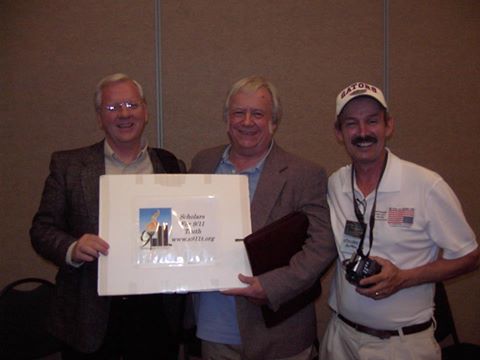 How little did I know back in June of 2006 at a 9/11 Truth conference in Chicago that I would be standing next to two of the biggest psyop engineers in the 9/11 Truth Movement when I had someone take this picture for me.

I had dinner with Steven Jones back in June of 2006 when I attended the 9/11 Truth conference in Chicago. I asked him at that dinner if he feared the government. His reply was he walked up staircases. WTF is that!

Dr Wood’s book has been out for over 2 years now do you ever hear this guy write or talk about her evidence. You know he likes to write about 9/11 he has at least 10 books about it. Here’s a picture with most of those books. 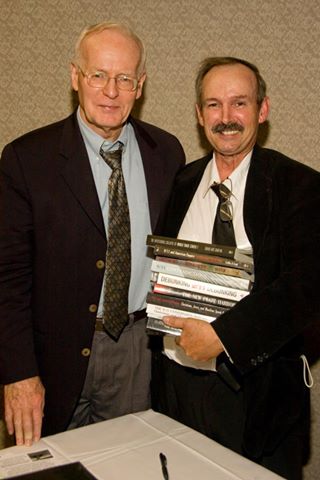 Organized his 15 city tour back in April/May of 2010. He even thanks me in one of his latest books. When he found out I was backing Dr Judy Wood’s research he asked to have his name removed from my website www.ts911t.org  where he signed up years ago.

It would be a cold day in hell before I ever let this guy put his arm around me again.

The more independent research you do the smarter you become. Remember it’s also the silence that gives you clues about thier truthfulness.

Worked with this guy a lot over the years and now that he knows where I stand with Dr Wood’s research I don’t hear from him anymore except for those pesky emails he sends out to promote something he is doing . 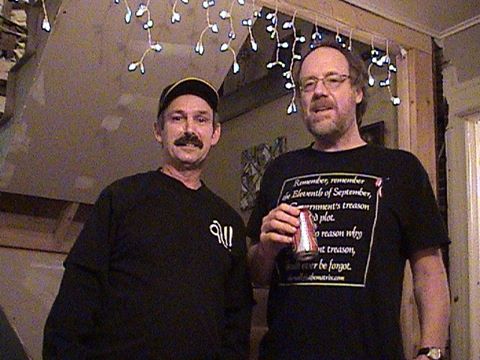