Thanks to Jay for passing on this to me. It would be funny if it wasn’t so scary. I think it makes the whole “fake news” PsyOp clearer. See the Guardian story below. Once again, it seems, the UK Daily Mail is a willing participant in the PsyOps.

·         Jessica Lessin, founder and editor-in-chief of The Information 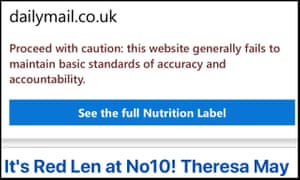 Microsoft’s internet browser is warning users not to trust the Daily Mail’s journalism as part of a feature designed to fight fake news.

Visitors to Mail Online who use Microsoft Edge can now see a statement asserting that “this website generally fails to maintain basic standards of accuracy and accountability” and “has been forced to pay damages in numerous high-profile cases”.

The message, which is produced by a third-party startup called NewsGuard, tells readers to proceed carefully given that “the site regularly publishes content that has damaged reputations, caused widespread alarm, or constituted harassment or invasion of privacy”.

It gives Mail Online, one of the world’s biggest news websites, one out of five on credibility – the same level as the Kremlin-backed RT news service.

NewsGuard is run by news industry veterans and says it is trying to establish industry-standard benchmarks for which news websites should be trusted. It employs analysts to manually check whether sites meet a series of journalistic standards, making all its judgments public and inviting outlets to respond to criticism and improve their standards to gain a higher rating.

Until now, the service has only been available as a downloadable plug-in but this week Microsoft began installing it automatically on all mobile editions of its Edge browser, the successor to Internet Explorer, in the first stage of what its creators hope will be a widespread roll-out across multiple platforms.

Edge has a tiny proportion of the global internet browser market and the NewsGuard plug-in is only included on the version for mobile users, not desktop users. The partnership was signed as part of Microsoft’s Defending Democracy programme; the tech company has no oversight over NewsGuard’s editorial verdicts.

Steve Brill, a NewsGuard co-founder, said the Mail Online verdict had been reached in a transparent manner. “We spell out fairly clearly in the label exactly how many times we have attempted to contact them. The analyst that wrote this writeup got someone on the phone who, as soon he heard who she was and where she was calling from, hung up. We would love to hear if they have a complaint or if they change anything.”

He said NewsGuard took complete responsibility for the verdicts and all complaints should be directed at his company rather than Microsoft. “They can blame us. And we’re happy to be blamed. Unlike the platforms we’re happy to be accountable.

“We want people to game our system. We are totally transparent. We are not an algorithm.”

NewsGuard’s business model relies on licensing its product to tech companies which want to fight online disinformation but do not want to take responsibility for making editorial judgments.

Brill said his company, which has received investment from the advertising group Publicis, has completed human-generated verdicts on the top 2,000 news outlets in the US and was hiring staff to produce similar verdicts on the top 150 news sites in the UK, with the aim of publishing results in April.

A spokesperson for MailOnline said: “We have only very recently become aware of the NewsGuard startup and are in discussions with them to have this egregiously erroneous classification resolved as soon as possible.”