Thanks to Chris Hamilton for sending me this 2016 video (25 mins) about the Challenger Disaster:

(It has a few minutes on Apollo near the end).  I have sent a couple of messages around about the Challenger disaster/scam before, over the last few years, but this video – German with English overdub – has a little more evidence relating to Ancestry.com checks, which I hadn’t seen before. It does seem like the Challenger either went aloft empty or had a different crew in. What is odd is how it all came out together – i.e. someone published all the oddities together – it wasn’t that each crew member’s “double”  was discovered separately. (It was mainly in an article by Darrell Foss, which was posted in 2015 – whale.to/c/was_the_c… – the original posting is no longer available)

You may yet see a few more messages about the Apollo Scam from me, as we approach the 50th anniversary of the scam. 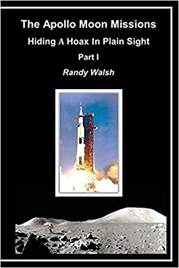 There’s an excellent article in the latest edition of Nexus magazine (April 2019, volume 26, no 3), by Randy Walsh, showing that the F1 engines on the Saturn V rockets were nowhere near as powerful as NASA claimed – in fact, they never used them again after the Apollo “missions”. Walsh has analysed an unedited shot of the Apollo 11 launch, and says that, 105 seconds after launch, it was at about 26,000 ft, not 79,000 ft as NASA claimed, which means it could only have reached Low Earth Orbit. The article is a summary of chapter 2 of Walsh’s book.

Randy himself has posted a short video: