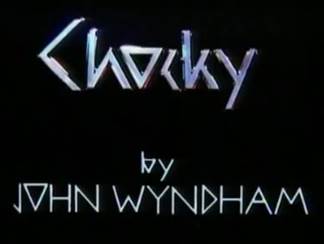 A few weeks ago, I was having an interesting conversation with a lady called Margaret, regarding a 1960s novel by John Wyndham. The novel is called “Chocky” and is about an alien intelligence that contacts a schoolboy and starts to interrogate him about what things are like on the earth. Somehow, this story came up in my YouTube playlist…

In 1984, the UK’s Thames Television adapted the novel into a 6-part children’s TV series – “Chocky”, updating some of the setting etc. They also made 2 further series in the following 2 years (“Chocky’s Children” and “Chocky’s Challenge”), but these storylines were written by Anthony Read. All 18 episodes are available on “YouTube” at the link below:

If you skip through the start and end credits and resumes etc, the total running time is about 7 hours. To explain why I found some of this very interesting, I’ve written “spoilers” below, so if you just want to be entertained and kept in suspense, use the YouTube link above and stop reading here!

The first series has a different feel to it than the others – it is more sinister overall, in that the “Chocky” entity is more manipulative and almost “possesses” the main character – the 11-year-old Matthew. He remains in telepathic communication, with Chocky (initialy by “thinking of nothing) throughout the story. Chocky is described as a “scout”.  Chocky is able to travel from a distant planet at high speed because “mind has no mass” and takes “no time to travel.”

Nearer the end of the first series, Chocky manifests as a glowing energy field, eventually being seen in series 1, episode 6 by Matthew’s Foster father, who communicates with Chocky too. The dialogue here is interesting:

Chocky: This is not my physical presence – it is just my energy field – created through Matthew. I have to teach… to help you find a source of infinite power – that will clear the way for your planet’s future development.

Father: What is this source of infinite power?

Chocky: A form of Cosmic Radiation – my mission was to guide you towards its discovery

Chocky then explains that she can only communicate with people like Matthew who have open/freer minds. Chocky then says she wanted to help Matthew develop an interest in sciences etc. Chocky regrets interfering and thinks she has created too many problems. Chocky decides to leave Matthew/the earth – saying it would not be safe to continue with him. Matthew’s father mentions how valuable the knowledge of Cosmic Energy would be. Chocky replies:

Valuable or dangerous? What would it be worth to your powerful energy interests to know of a new source of energy which could destroy them? How much would a little boy’s life count in removing that danger? As long as Matthew does not become involved in Science, he will be safe…

Chocky then says she will have to “work in different ways” and involve more people (which happens later on). In the story, Matthew develops an interest in drawing and painting, stating that Chocky taught him how to observe things. He becomes an award-winning artist

As you will find in the story, government and other interests are never too far away. Matthew is kidnapped, drugged and held hostage in a psychiatric hospital – where they try to get information out of him. The government then keep an eye on Matthew, in case he comes into contact with Chocky again. Pretty scary stuff for a kids’ TV show!

In the later 2 series, more young children are brought into the story – and again, government/military interference is shown quite realistically. For example, Matthew is spied on while he stays with an Aunt – her gardner is actually a spook!

In series 3, the children (including Matthew) re-establish contact with Chocky and, with the help of academics at Cambridge, build a “Cosmic Energy” device/collector  and then – wait for it… They make a gravity shield! In one scene, the children float above it. The units are then stolen by a woman who claims to be working for the “Ministry of Science” (she shows them a fake business card) – but she is actually working for military intelligence.

Of course, what interested me was that these were the 2 devices they built in the story – a “free energy” device and an antigravity device! The design of the devices is also interesting. The device they build is a tetrahedral (3 sided) pyramid – and the prop they use looks pretty good.

As I have already written in my books, this is how the cover up works – such concepts are put into science fiction stories  – where they remain. That is to say, unless folks do the research that some or all of the readers of this website have done or are doing, who’s going to take the themes/scenarios of some cheesy 1980s kids’ TV show seriously?