I was recently contacted by Carl James – he has just published a new book on Amazon about the famous 1938 “War of the Worlds” broadcast. I have included the link and description below.

On October 30th, 1938, Orson Welles and The Mercury Theatre on the Air broadcast an adaption of H.G. Wells’ “The War of the Worlds” on CBS Radio. As the broadcast played out, press and media sources began to report stories of a “mass panic” amongst American citizens. These developing stories claimed that millions of people had mistaken the broadcast for news coverage of a Martian invasion of Earth. Into this drama, stepped a number of academics from Princeton University. Under the auspices of The Rockefeller Foundation, these men were already studying the effect of radio on social psychology at CBS. Utilising a study of the broadcast and listener reaction, an elaborate myth of “mass panic” was cemented into the public consciousness for the following 80 years. Using archive documentation, alternative knowledge researcher Carl James has delved deeply into the narrative of the broadcast to tell the true story behind the myth of a “mass panic”. This book examines those Princeton academics who helped to shape and perpetuate the myth, and uncovers an elaborate web of social engineering and psychological warfare involving the media, intelligence agencies, government and moneyed elites. The evidence presented poses a disturbing question: Was the 1938 “The War of the Worlds” broadcast a media-led psychological operation?

Carl has also published a book about how the Science Fiction genre (across all media) has been used to promote certain concepts and themes, which seem to be part of the “New World Order” mindset

These 2 books, along with a 3rd one that Carl has written about the 2012 Olympics can be downloaded in free PDF form from the links below. 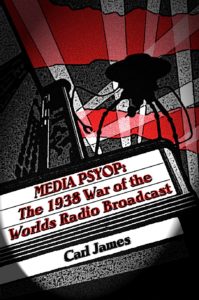 Media Psyop – The 1938 War of the Worlds Radio Broadcast.pdf – checktheevidencecom….