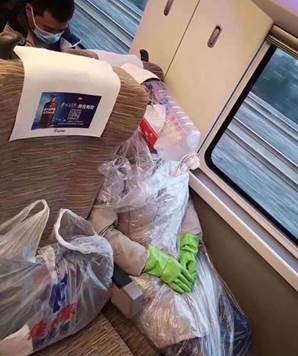 In a story from 14 May 2020, he is quoted as saying: “Anyone who does not distinguish between the opportunities and the dangers associated with globalization is denying reality.”

Annie Logical (Ann Carey) on the Global Preparedness Monitoring Board

A short discussion of one of the “tools” that was used to develop the pandemic scam, which was also covered in a video by “Amazing Polly” about the same time Ann posted this one.

And here is the relevant document from Sept 2019

Dolan has posted another document – the Witness Statement of Michael Gardner

It lays out the now all-too-familiar story of what’s happened (in the UK), although, of course, care is taken about the way that story is presented.

This was originally sent to me last week. Some NHS workers are speaking out – but still want to remain anonymous, due, again to the psychological warfare that we are all being subjected to.

As an NHS employee I have  felt very uncomfortable these last couple of months with the glorification of NHS staff and other key workers especially when so many members of the public who need to be receiving treatment have not been able to access it. I am not saying that there haven’t been busy departments and staff under stress but  in the large hospital I work in in Scotland many departments have been extremely quiet to the point where we’re catching up with paperwork that we never normally complete! The fact that so many people have been unable to spend time with their loved ones approaching and after death has also been a great concern to me. I do appreciate that measures need to be put in place when a  virus is circulating within any population but surely we should have been able to ensure that people could still visit loved ones, especially around the time of death with the necessary PPE. The effects of these restrictions will be enormous. Never mind the effect of the lockdown on entire populations.. Many well respected scientists have questioned the narrative that has been pushed in the media but as far as I can tell they have struggled to gain exposure.

I have great reservations about how schools are going to be when they reopen. My friend is a teacher in Glasgow and is at the point of giving up her teaching career if what she is being told comes to fruition. She doesn’t want to have any part in imposing social distancing measures on children, over-sanitising of hands, ‘stay safe’ slogans, rainbow stickers and especially any mention of a ‘new normal’.

Thanks to Paul for sending me this. More disturbing connections laid out by “Amazing Polly” here (22 mins)

Thanks to Jeremy for sending me this. I don’t subscribe to any mainstream news so can’t read beyond the first couple of paragraphs. Any honest journalist could easily have compiled a report like mine – but, of course, could never have it published – and therein lies the rub…. as it were….

The media, as ever, are as guilty (if not more guilty) than the politicians.

He works as a therapist in Yorkshire, England and I have had the pleasure of giving talks at his Centre (www.holistic-wellbei…) on quite a few occasions. What he posted on Facebook (copied below) is very well-observed:

How is your mental health right now?

So, we are witnessing what I would term as the greatest psychological attack in human history other than that of religious and political indoctrination.

In religious texts, we, humanity, are referred to as sheep. We follow each other along a single pathway regardless and unaware of what lies ahead. Many weeks ago, I received some information from a “higher source” who shall remain nameless. I made the mistake of putting it on Facebook but on what I thought was better judgement at the time, I removed it due to its adverse reaction. However, as time has gone on, I realise that I should have left it right where it was. It was a message that some were not ready to hear and I’m sure there are many who will still not want to hear it now. I was branded callous, insensitive and called something which I’ve never heard before which was a “lasagne c**t!”??

The message was that this is “a virus of the mind!” Does this ring true to anyone now?

There is so much information being released about the reality of all this that some days, it is hard for me to believe that people are still on that pathway, following the flock but I am learning to accept this, knowing that all I can do is to sow seeds and that we all awaken in our own time. It doesn’t stop me from having good days and not so good days though and my compulsion to write never abates (sorry).

I came here to write about this. They are calling it the “new normal” I believe? A world of social distancing. All this even after “it” is being exposed that “it” is no worse than a severe case of flu. Even in their own roundabout, ambiguous, non-committal words they have said this, publicly! All the fear mongering, the grief, the pain people have been put through to be now told what many knew at the beginning. So why:

I was involved in an online meeting aimed at therapists yesterday and it was intimated that we now need to be putting in measures to cater for social distancing and make sure we are following the guidelines and be properly insured. Any professional therapist already ensures that they are insured and that the wellbeing of their clients is paramount, however, it was said that we need to protect ourselves from clients who may accuse a therapist of passing on the virus. How is that legally provable and again, what about the flu in all this?

The words social distancing, lockdown, self-isolation c*r**a, c*vi* 1* are everywhere we look. They are psychological triggers. They are more damaging to the human psyche than anything. Repetition of trigger words to create fear and enforce control.

A virus of the mind. We are being mind-controlled.

I remember taking my dad to the doctors in the early days of this kicking off and observing the leaflets and posters adorning the doors and walls and considering the timeline from design to print to supply chain how quickly that process had happened. It made me think then whether this had been pre planned?

There are other subtle and subversive issues which have been leading up to this mind control program, again suggesting that this has all been planned. The phone app! Has your bank more or less forced you into using your phone to get access to your money?
I would gladly ditch my phone any day but now, I am beholden to it as the only means to get access to manage my bank account. Just a thought?

Hate me for it, ignore it, unfriend me, feel free to think I’m an idiot and should not be saying these things, call me a rude word with pasta in it if you want and I will still respect your right to have a difference of opinion but what concerns me, is that if we continue to ignore the evidence and realise that our minds are being manipulated, we will continue to slide in to the world of the “Emperor’s new clothes.” How many little boys and girls is it going to take to stand up and expose this psychological civil war, before people choose to wake up and refuse to accept any more mental damage to themselves and their families?

Update: a number of people have asked if it’s ok to share and yes, please do. 🙏