Following a similar FOI request in Canada, I submitted one, a few weeks ago, to Public Health England. They responded a few days ago

Your Request
All records in the possession, custody or control of Public Health England
describing the isolation of a SARS-COV-2 virus, directly from a sample taken
from a diseased patient, where the patient sample was not first combined with
any other source of genetic material (i.e. monkey kidney cells aka vero cells;
liver cancer cells).

Please note that I am using “isolation” in the every-day sense of the word: the
act of separating a thing(s) from everything else. I am not requesting records
where “isolation of SARS-COV-2” refers *instead* to:

• the culturing of something, or
• the performance of an amplification test (i.e. a PCR test), or • the sequencing
of something.

Please also note that my request is not limited to records that were authored
by the PHE or that pertain to work done by the PHE. My request includes any
sort of record, for example (but not limited to) any published peer-reviewed
study that the PHE has downloaded or printed.

Please provide enough information about each record so that I may identify
and access each record with certainty (i.e. title, author(s), date, journal, where
the public may access it).”

Response
PHE can confirm it does not hold information in the way suggested by your request.

Under section 16 of the Act, public authorities have a duty to provide advice and
assistance. I have signposted you to the below links which contain information on
taking COVID-19 swabs.

Additionally, the below publication contains some information on virus isolation:
www.eurosurveillance…
7917.ES.2020.25.32.2001483

If you have any queries regarding the information that has been supplied to you,
please refer your query to in writing in the first instance. If you remain dissatisfied
and would like to request an internal review, then please contact us at the address
above or by emailing xxx@xxx.xxx.xx.

It kind of speaks for itself, doesn’t it? I have another FOI in progress regarding the use of testing kits. Someone asked me to try to explain this more clearly, so this was how I replied to them:

Public Health England have no direct, documented evidence in their possession which (a) Proves that SARS-COV2 virus has been isolated from tissue in a corpse (b) They have no direct evidence That SARS-COV2 causes the disease COVID-19. All they have is evidence from a PCR test which is said to detect a SMALL PART of the RNA (protein) in the virus.

It’s a bit like saying “We found some *parts* of some mouse droppings which are probably from the door mouse” – but, they don’t have an entire chunk of dropping which could more accurately identify the exact species of mouse. Neither do they have the body of the door mouse which was “causing all the problems”.

A total of 77 tests from 11 NFL teams processed by the same New Jersey lab came back positive from Saturday’s COVID-19 testing, per league source. All 77 individuals underwent an additional point of care test — and all tested negative.

The 77 number is suspect – especially as this seems to have come from a rather “mainstream” source.

Another potential non-vaccine treatment for victims of the mystery non-deadly virus – but it has not been as censored as HCQ was.

Following the re-circulation of the “Chromosme 8” posting I included in the previous update, Dr Kaufman broke this down in an interview with David Icke recently:

Kaufman discusses this video www.youtube.com/watc… – which is an animation illustrating how the test works (and it matches my understanding of it from previous discussions I’d read). I edited out the relevant portions and posted them in a shorter video here: youtu.be/yexcogLsK3U (Backup: www.bitchute.com/vid…)

Thanks to Jonathan for this link, from 2018:

First Minister Nicola Sturgeon welcomed Bill Gates to St Andrew’s House to hear first-hand about some of the work being carried out by NHS Scotland staff as part of our commitment to global health. 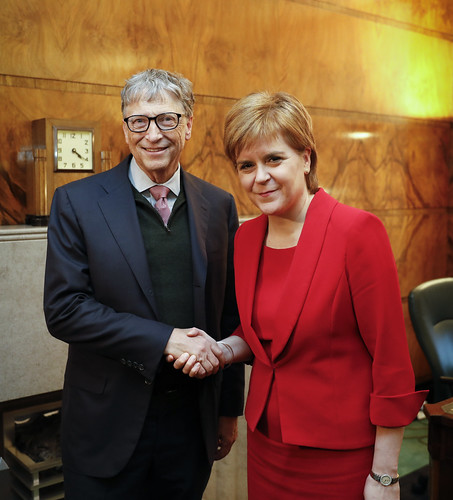 Internet of Bodies (Not Humans)

Perhaps the choice of title really says it all? It relates to “IoT”  – the “Internet of Things” which has developed in the last 5-10 years – such that your car, fridge, TV, microwave, doorbell and home appliances are connected to the Internet. Next it’s your “body” (and this is already kind of happening to a degree with smartwatches, “Fitbit” type devices etc).

I received this from Stephen S – another sinister instance, it seems.

www.youtube.com/watc…
Lower Decks is a recently launched CBS animated show which is a parody of Star Trek: The Next Generation. This is a clip where all the children are kneeling and within designated squares, much like the social distancing images we have seen from around the world. The video I have linked to you compares it with the ethics of the original show, where servitude and subjugation is completely frowned upon, for comparison.
Creepy, wouldn’t you say? Call me paranoid, maybe it’s a leap – but I refuse to believe this is a coincidence. The “next generation” – my daughter’s generation – are being programmed for a life of servitude with a complete absence of critical thinking. This ties in to the infrared “temperature guns” that are currently being routinely pointed at shopper’s pineal glands in the UK…