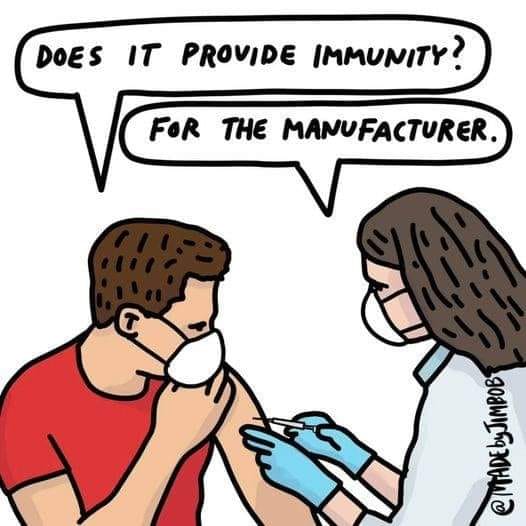 Look how the disgraced mainstream reported this (to use one of their favourite trigger words):

No additional words needed. The media are complicit in crimes and oppression.

Dr Reiner Fuellmich – We have the Evidence

This is worth 20 minutes of your time…

I featured this link: www.bmj.com/content/… in an earlier posting:

I couldn’t find any sort of other listing for this London Doctor, however…

Data released today by the Centers for Disease Control and Prevention (CDC) on the number of injuries and deaths reported to the Vaccine Adverse Event Reporting System (VAERS) following COVID vaccines revealed reports of blood clots and other related blood disorders associated with all three vaccines approved for Emergency Use Authorization in the U.S. — Pfizer, Moderna and Johnson & Johnson (J&J). So far, only the J&J vaccine has been paused because of blood clot concerns.

The Vatican has invited Chelsea Clinton, Dr. Fauci, New Age figure Deepak Chopra, and the CEOs of Moderna and Pfizer to speak at a May conference focusing on “health” and the “soul”

Birds of a Feather Flock Together??

Dr Mike Yeadon Concludes – “It Was All Planned”

Yeadon talks about the building of a database for everyone. He also rightly says he doesn’t really know what the motivation for such a plan is – as it’s “not my crime.”

Yeadon has earlier stated: “Your government is lying to you in a way that could lead to your death.”

Dr. Yeadon began identifying himself as merely a “boring guy” who went “to work for a big drug company … listening to the main national broadcast and reading the broad sheet newspapers.”

I have been quite alarmed at the high rate of serious side-effects from this novel treatment.
From this relatively small number of people vaccinated so far, we have had:

<![if !supportLists]>2.                      <![endif]>One (presumed) vaccine induced sudden death, (in a 72 year old patient with COPD. This patient complained of being more short of breath continually after receiving the vaccine, and died very suddenly and unexpectedly on day 24, after the vaccine. He had no history of cardiovascular disease).

A Wider View – from a Reader Cyber Polygon and More

I was sent this informative text recently and thought it worthwhile to include it here.

I note you have mentioned cyber polygon 2020 as possible predictive programming, I believe the 2021 ‘live exercise’ is the financial ‘cyber pandemic’ version of event 201 ‘covid pandemic’.

My research points to the ‘great reset’ to a digital currency/social credit/digital ID etc. on the back of the global financial system crashing will be blamed on a cyber attack, or ‘cyber pandemic’ as Heir Klaus, Gates et al call it.

As ever I’ve been keeping a weather eye on the globalists preparations for this, in an attempt to get a grip on the timing.

Two important pieces to understand their plans are below: The first serves as a primer, the second is a much longer piece including all the main players, notably Russia, is heavily involved with the usual globalist players, so we can guess the ‘bogy man’ will not be Russian hackers this time, It’ll probably be blamed on N. Korea or Iran (since China was fully onboard with event 201 we can assume they’re fully paid up members of the globalist club). Just reading the main players and their backgrounds makes it obvious digital currency, social credit, digital ID etc. is all coming together in this. Although it’s not mentioned anywhere in these pages, I fully expect universal basic income (UBI) will be the “solution” that opens the door to everyone having to accept the new system, as regular currency will be wiped out.

Any search engine will pull up lots of predictive programming and white papers regarding UBI (including promotional posters on London bus stops). Also worthy of note, both China & Russia recently launched their own central bank digital currencies.

Cyber Polygon 2021 is a live exercise testing the scenario, the event will start 9th July

The most recent blatherings from the UK are from Jan 2020 launching a ‘central bank group’ comprising BOE, Japan, EU central bank, Sweden, and the BIS, to assess potential cases. UK announced in Nov 2020 they were drafting legislation for ‘stablecoins & CBDC’

EU central bank president Christine Lagarde recently stated they intend to launch digital currency around the middle of this decade.

Given the World Bank pandemic preparedness documents state covid-19 scenario will end March 31st 2025, and the  Johns Hopkins Center for Health Security document published in October 2017 “The SPARS Epidemic of 2025-2028” (SPARS) it’s not difficult for regular ‘coincidence theorists’ to join the dots.

I believe the current scamdemic is a dry run, partly to program populations in preparation, introduce digital ID, and partly to perfect their systems ready for the real thing in the latter half of this decade. We could also speculate the ‘jab’ they are so eager to force on us all is part 1 of a two part depopulation biological preparation for the later event.

Some people refuse to see the eugenic agenda behind all this, if you study the way agenda 21/30 has infested governments legislation globally, the switch to useless intermittent technologies to generate power, UK electricity generation infrastructure cannot possibly cope with ‘eco’ electricity demand from home heating, e-vehicles etc. unless there is a massive population decrease.

Hugotalks briefly covers the UK gov legislation mandating banning gas central heating in exchange for inefficient heat pumps costing £9000-£30000 to get an ‘eco certificate’ without which you will not be able to sell your house, get a mortgage, or remortgage.

The UK banning internal combustion engines by 2030 has been well covered in the media.

I’m sure a lot of this has been on your radar, but very few people seem to be joining all the dots.