Some thoughts and reaction and an account about what has been happening..

Information is now circulating that the UK will go into “lockdown” (horrible word) starting either this evening or tomorrow – in London and then across the UK over the next few days. 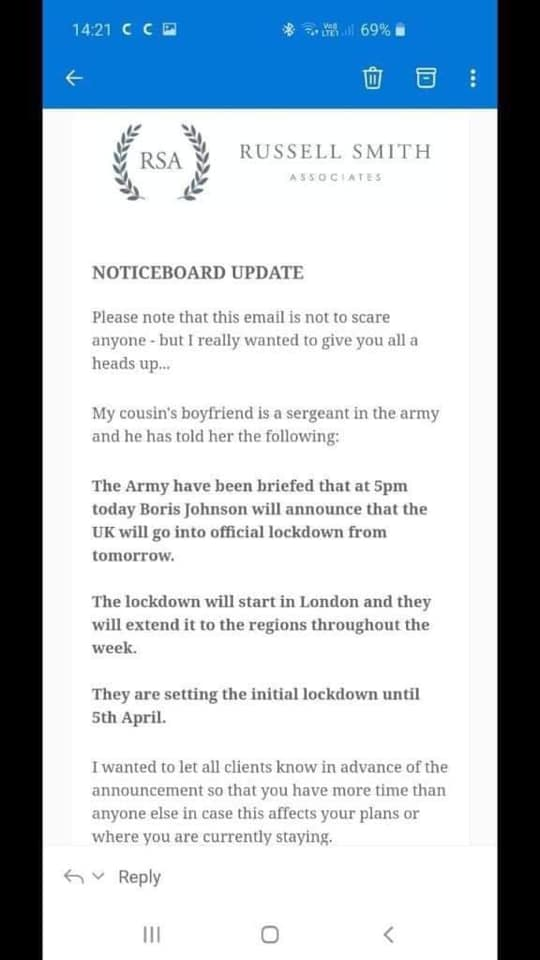 There have been some reports in mainstream media. Several people I know (Check The Evidence Readers) think there is some truth to the virus story, but the evidence strongly suggests or proves it is a planned scam, as I posted already. If they pull back the army in 2 weeks, they are more likely to be seen as “saviours” etc…  Is this the trial run for “something much worse”?

I have further considered the timing of this in the UK – and other countries – coming after a winter/spring of repeated flooding and bad weather elsewhere in the world – the Australian Bush Fires etc – then we have had the revelations about Prince Andrew. It is therefore difficult to know what is happening with the global power structures.

Where this is heading, I don’t know – everything is up in the air. Will we have curfews here? Will we have censorship? Will some other group take power? Has this already happened? What will be the results of the “crashing” of the various global economies?

I have received a few interesting messages, one of which is pasted below. 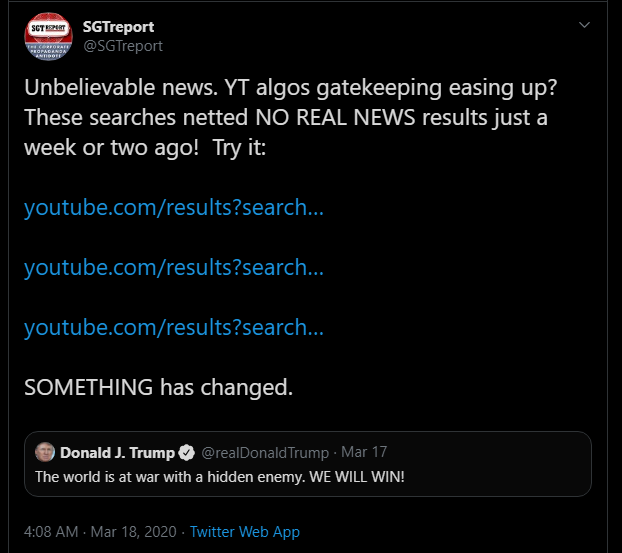 Is Trump referring to the “virus”? Or is this support for this other message I received via Facebook? 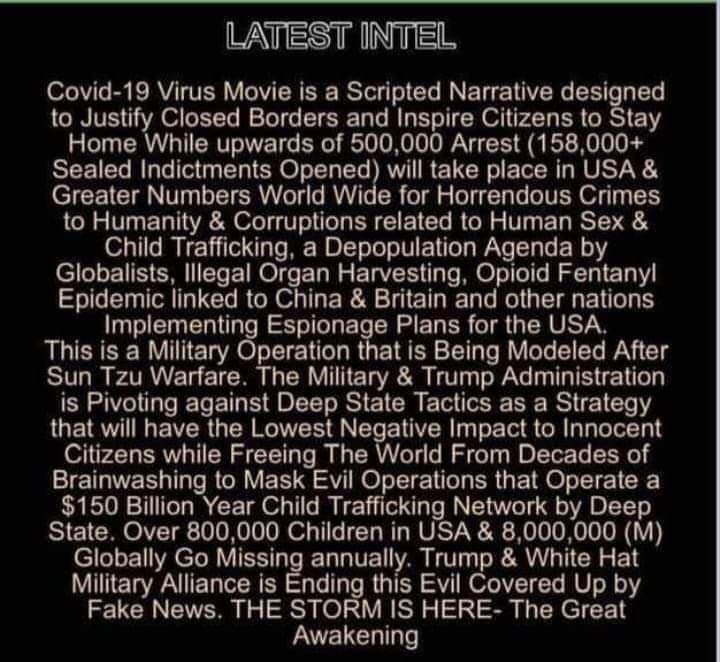 Hi Andrew, I was just reading the WHO piece you posted. I have been very sceptical of the activities of these big organisations for years so I’m pretty much open to what it says. I am back in the US, i arrived here on the day prior to the borders being closed, a few hours before. I was expecting (at O Hare) the madness I’d seen on CNN the previous day when the airport was dangerously over crowded, but as it turned out we, from Heathrow, on a Double-Decker 747, were part of a last trickle into the US, the bulk having arrived 24 hrs before.

I usually have issues getting in via Chicago, but not this time, yes I had to be questioned about where I’d been and did I feel well, but it was very quick. I had a fascinating conversation with a Homeland Security (HSec) guy at passport control. I was expecting to be turned back, but the risk to me was worth it. The guy was VERY agitated, not with me, but with what is happening here in the US. He confided in me that he, and many of his HS colleagues, were freaking out because they genuinely believed that Trump was using the virus as a means to seize ultimate, dictatorial power. At first I thought it was a ruse to get me to slag off their government, but soon realised by his body language that he just wanted me to know how dangerous it could be here now.

The good thing I take out of that there are good people, lots of them, in HSec He was constantly looking around to make sure nobody was listening in. Why me? A friend who studies human behaviour reckons that they are trained to ‘read’ people, and he knew that I was ‘intelligent (🤔😉) and someone who clearly thinks for themself, (based perhaps on my more casual independent appearance) and not someone who’d run off to his superior officer and dob him in. We live in interesting times Andrew🤔

Another reader sent me this:

And then, there is this from Jon Rappaport’s Blog

Corona Bologna Italy: The Truth begins to leak out

The government of Italy, as everyone knows, has locked down the whole country of 60 million people. So how many Italians have died from COV? Even by the standards of the useless and misleading diagnostic tests?

As far as the Italian Higher Institute of Health knows, at this point:

Try to wrap your mind around that.

Seems the president of the Italian Higher Institute has some smarts. He understands that people who already have other serious health conditions, which have nothing to do with COV, can and do die from those other conditions, regardless of the fact that they’ve tested positive (on useless tests) for COV. He gets it. I predict a great future for him. If he keeps shooting his mouth off, he might find himself working as a weed puller in a forest. Or he might suddenly be diagnosed with the virus and find himself in isolation.

Grit your teeth and plow through this piece from Rome, 13 March 2020, Agenzia Nova: “Coronavirus: ISS [Italian National Institute of Health]: in Italy there are only two deaths ascertained so far due to Covid-19” (Italian, English)

“There may be only two people who died from coronavirus in Italy, who did not present other pathologies. This is what emerges from the medical records examined so far by the Higher Institute of Health, according to what was reported by the President of the Institute [Istituto Superiore di Sanità (ISS), Italian National Institute of Health], Silvio Brusaferro, during the press conference held today at the Civil Protection in Rome. ‘Positive deceased patients have an average of over 80 years – 80.3 to be exact…The majority of these people are carriers of chronic diseases. Only two people were not presently carriers of [other non-COV] diseases’, but even in these two cases, the examination of the files is not concluded and therefore, causes of death different from Covid-19 could emerge. The president of the ISS has specified that ‘little more than a hundred medical records’ have so far come from hospitals throughout Italy.”

“…At present, in fact, the authorities are unable to distinguish those who died from the virus, from those who, on the other hand, are communicated daily to the public, but who were mostly carriers of other serious diseases and who, therefore, would not have died from Covid-19. In response to a question from ‘Agenzia Nova’, in fact, Brusaferro was unable to indicate the exact number of coronavirus deaths. However, the professor clarified that, according to the data analyzed, the vast majority of the victims ‘had serious [non-COV] pathologies and in some cases the onset of an infection of the respiratory tract can lead more easily to death.’ To clarify this point, and provide real data, ‘as we acquire the folders we will go further. However, the populations most at risk are fragile, carriers of multiple diseases’.”

Translation into non-medical language: the people dying in Italy have other very serious traditional diseases that have nothing to do with COV, and it’s obvious they could have died, and probably did die, from those other diseases. Nevertheless, we’re locking down the whole country.

So, for those people straining to find a reason for the “devastation” overtaking Italy—it’s karma for ancient Rome trying to conquer half the known world; it’s the ghost of Martin Luther obtaining revenge against the Vatican; it’s a bioweapon with the power to cut down millions of people overnight; it’s a virus that came in with a small meteor and crashed outside Milan; it’s Chinese revenge against Marco Polo for stealing the concept of noodles—

Take a break, relax, have a plate of pasta, turn on the TV, and because all the stadiums are empty, watch a rerun of a soccer match from 1979.

PS: For those people who believe this head of the Italian Institute is lying with his facts and figures, stop and think it through. He’s going to announce such devastating news that essentially contradicts everything the Italian government is doing with its lockdowns and quarantines of the whole country? It would be as if the director of the Centers for Disease Control announced, “There are a total of nine deaths in the US we think might have been caused by COV, and even there we’re not sure, because you see, these nine were elderly people who could barely get out of bed long before COV emerged. These nine had extremely serious lung disease NOT CAUSED, I repeat, NOT CAUSED by COV…but anyway, don’t go outside, work from home, don’t touch another human being, watch our website for bargain deals on toilet paper, and oh yes, don’t forget to get your regular flu shot if you can slip into a hazmat suit and drive at breakneck speed to your nearest pharmacy, where injection clerks are waiting…”

Finally, here is an article about new UK laws – the URL has an appropriate adjective: