info@checktheevidence.com Knowledge, Not Belief
adj
Free e-Books – Click the banners below for more details, or scroll down for descriptions! Share this page around!
I admire anyone that has the courage to study my books and talk about and share them afterwards…!
Click the PDF Icon Below the banner to Download each book!

9-11 – Holding the Truth by Andrew Johnson

Secrets in the Solar System: Gatekeepers On Earth

Acknowledged: A Perspective on the Matters of UFOs, Aliens and Crop Circles

The Earth – but not as We Know It… An Exploration

Since 1957, robotic space probes have visited all the planets in the Solar System. Is it the case that they have only found mostly uninteresting collections of gas, rocks, ice and dust? Has any evidence of past or present life in the Solar System ever been discovered?

This book will take you “on a journey” to the Sun and the Moon, Mars, Phobos, Saturn and some of its moons. It will show you some of the numerous anomalies that have been found. Could it be the case that taxpayer-funded space agencies have ignored or even lied about these anomalies, and their significance?

After more than 10 years of ongoing research, collected together here, for the first time anywhere, are over 350 fully referenced pictures and data from over 50 years of space missions. Anomalous images are presented with some detailed explanations, commentary and analysis, completed by various researchers. The book asks what would happen if NASA or ESA scientists had discovered compelling evidence of past or present extra-terrestrial life in the Solar System? Would they “tell us the truth, the whole truth and nothing but the truth” about such a discovery? Or, would the “scientific technological elite” mentioned in Eisenhower’s final address to the USA in 1961, become the “gatekeepers” of “Secrets in the Solar System?” 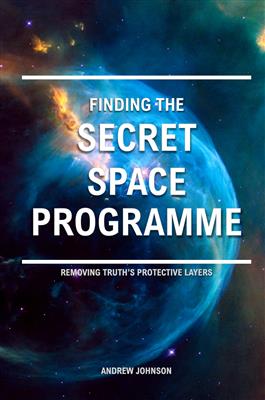 The “Space Age” began in 1957 and since then, we are told, missions have studied all the planets in the Solar System. Most people believe that one of the greatest technological achievements happened in 1969, when Neil Armstrong allegedly walked on the surface of the moon. The last Apollo mission ended in 1972 and later manned space missions never travelled beyond low Earth orbit, despite enormous advances in many technologies. This book considers the works of Dr Paul La Violette and Defence Journalist Nick Cook regarding antigravity research in the aerospace industry and elsewhere. It analyses the statements of certain whistle-blowers, who claim to have worked on covert propulsion and energy technology programmes. The Apollo programme and its background are also studied in some depth, along with claims and statements made by some of the Apollo astronauts.

Is it true that exotic propulsion technologies have been successfully developed and deployed, as part of a secret space programme – and comprehensively hidden from public view, using sophisticated methods?

After more than 14 years of ongoing research, collected together here, probably for the first time anywhere, are referenced images, quotes analysis and commentary. A study of this evidence should help us to remove what Neil Armstrong referred to as “Truth’s Protective Layers.”

Have aliens really visited us? What do they look like? Where do they come from and why are they here? Have they given us messages in Crop Circles? What historical evidence is there that aliens have been involved in the evolution or creation of humans? Is there a UFO/Alien cover up? If so, how is it kept in place? This book embodies an attempt to give some answers to the questions above, based on a compilation and distillation of evidence collected during about 15 years of ongoing research. Although this book is not written for people who are new to these topics, “newbies” and seasoned researchers alike should find something useful herein. Detailed information and over 900 references aim to give the reader a perspective on alien intervention, alien abduction, alien contact, landings and crashes. The involvement of military and intelligence interests and their influence on the so-called “Disclosure” movement is also considered. Also included is a critical look at certain prominent UFO researchers, who seem to be helping to keep certain truths obscured or marginalised. The second part of the book studies various facets of the Crop Circle Phenomenon in a similar way to part one.

Although most or all of the information in this book has been written about elsewhere, this work attempts a synthesis of reasoned analysis which, it is hoped, will enlighten the reader and give them a new understanding about why any official type of “Disclosure” is unlikely to happen, as powerful interests need to keep their crimes covered up.

This book collects together, for the first time anywhere, a range of diverse data which proves that the whole issue of “climate change” is more complicated and challenging than almost all researchers are willing to consider, examine, or entertain. For example, this book contains astronomical data which most climatologists will not discuss in full. Similarly, the book contains climate and weather data that astronomers will not discuss. The book contains some data that neither astronomers nor climatologists will discuss. It contains some data that no scientists will appropriately discuss. It will show the reader why the climate change/global warming scam was invented, and it will illustrate how the scam has been implemented.

What really happened on 9/11? What can the evidence tell us? Who is covering up the evidence, and why are they covering it up? This book attempts to give some answers to these questions and has been written by someone who has become deeply involved in research into what happened on 9/11. A study of the available evidence will challenge you and much of what you assumed to be true.

The truth about what happened to the World Trade Centre on 11 September 2001 was discovered by Dr Judy Wood, through careful research between 2001 and 2008. The author of this book, Andrew Johnson, had a “good view” of how later parts of Dr Wood’s research “came together.” Not only that, he was also involved in activities, correspondence and research which illustrated that this truth was being deliberately covered up. This book is a companion and follow-up volume to “9/11 Finding the Truth” – and documents ongoing (and successful) efforts to keep the truth out of the reach of most of the population. Evidence in this book, gathered over a period of 12 years, shows that the cover up is “micro-managed,” internationally and even globally. The book names people who are involved in the cover up. It illustrates how they often stick to “talking points” and seem to have certain patterns of behaviour. It attempts to illustrate how difficult it is to prevent the truth from being marginalised, attacked and “muddled up.”

Most of us who have an interest in the planet we live on have seen diagrams showing the Earth’s interior. We are told it is very hot and made of iron. Is this really true? How far have we actually “dug down” to find this “hot ball of iron”? Where did our enormous oceans come from and have they always been here? And anyway, how did our planet form? Have you ever looked at a map and noticed how the west coast of Africa seems to fit against the east coast of South America – as if they were pieces of some enormous continental jigsaw? Has our planet always been the same size, or has it grown since it formed? Why do some people think we might live on a “hollow earth?” And how was it possible for the dinosaurs to grow to such enormous size, millions of years ago? How are all these questions even related to each other?

In this book we will try to find some answers to these questions by looking at the research of Dr James Maxlow, Jan Lamprecht, Stephen Hurrell, Peter Woodhead, Wallace Thornhill, Fredrik Nygaard and Neal Adams. We will look at some of the most compelling scientific and geological evidence which shows that the Earth is expanding.  We will embark on a journey through time and inner space, learn a little about gravity and the “Electric Universe” and attempt to find the truth about what may be at the centre of our planet, and understand why it is expanding.