2012 Video (Thanks to Kent Freedom Movement):

What really happened on 9/11? What can the evidence tell us? Who is covering up the evidence, and why are they covering it up? This book attempts to give some answers to these questions and has been written by someone who has become deeply involved in research into what happened on 9/11. A study of the available evidence will challenge you and much of what you assumed to be true. “Now we are discovering that there is a highly-sophisticated black-ops weaponization of free energy technology and it was responsible for the bizarre, low-temperature pulverization of the Twin Towers. Dr. Judy Wood has pieced together the physical evidence and Andrew Johnson has highlighted who is working to silence or smear whom, as the powers that be rush to impede or at least contain the dissemination of these startling findings.” – Conrado Salas Cano, M.S. in Physics. Free Download of the text is available below above – or order a paperback using a link below, if you wish.
5.0 out of 5 stars A Top Notch Researcher Helps to Clear the Dust from Ground Zero, April 22, 2011
By
Matthew Goddard (Sierra Nevada) – See all my reviews
(REAL NAME)
This review is from: 9-11 – Finding the Truth (Perfect Paperback)

Thankfully, Andrew Johnson has brought his laser focus to this topic, and we can all reap the benefits. The amount of disinformation and psyop piled on top of the story of 9/11 has made the search for truth a daunting and difficult task.
However, this book is an excellent overview of what really happened on September 11th 2001, and serves to cut through the lies and cover stories employed since then.
If you are ready for the truth, this book illuminates the science and facts surrounding 9/11. It also serves to ‘disinfect’ the odorous behavior of the shills involved in the Fake 9/11 truth movement.

This book provides a valuable resource to any reader who comes across it. What I think is of unique “meta”-informational value are your expositions and clarifications of the whole process of reasoning (scientific or otherwise). You provide people with the conceptual structure (through your words) which they can use as a tool and apply it to the various arguments (or, as they used to say in a particular skit on Monty Python’s Flying Circus, “That’s not an ‘argument’, it’s just a ‘contradiction’!”) they encounter in trying to discuss some particular evidence under consideration. If people had awareness and familiarity in all the various types of fallacious reasoning, and substitutes for reasoning, they would be much-better equipped and confident in discussing points of view which differ from the culturally prevalent one. I recall you quote someone who used (and maybe ‘coined’) the expression, “playing the man, instead of the ball”, as a more-visually impacting and therefore more memorable way of characterizing “ad hominem” arguments (attacks). I believe all of your efforts at dissecting arguments and asking “What was the intent in doing/stating/asking such and such?” collectively add a great deal of value and impact/influence to your book. It really helps people to think – and gives them a model for how to process a situation, or event, or even a piece of evidence, and, in so doing, provides de facto encouragement for them to do the same when they encounter a person, thing, or event, or whatever on their own. When you talk directly and specifically about the process of evaluating things we are told through the media, etc I found those ideas to be a very valuable aspect threaded through the articles.

Andrew Johnson, in “9/11 Finding the Truth”, sets out to show the reader that there is more to the Truth about 9/11 than meets the eye. When ever I bring up the subject of 9/11 I am  amazed that most people I have spoken to so far have just accepted the story that they have been given by the Media. That Two Planes flew into Two Towers and then they fell down. People in general don’t even know about Tower Seven let alone all the other Buildings that where effected on that Day.

I was very surprised when someone very close to me told me he thought it was an inside Job within a few months of the event. I was even more surprised to find out first hand that many Journalists also felt this but considered it more than there Jobs worth to voice there opinions. I remained skeptical until a couple of years back when I started to venture into the wonderful world of You Tube researching the Mysterious HUM (Taos HUM etc.) Then I began watching all the videos concerning 9/11 and eventually turned to Alex Jones where I was able to watch many films covering some aspects of 9/11. Something seemed wrong as I kept watching those buildings “come down” at free fall speed and it just did not sit right with me. I mentioned to a good “You Tube friend”, that I was not happy with the theory that it was a series of controlled demolitions that brought down the Towers. She instantly directed me to Dr. Judy Wood at her site drjudywood.com and suddenly my eyes where opened. I  watched all of her lectures and listened to all of her Radio interviews including the ones with the Author of this very valuable book.

Andrew certainly achieves his objectives with this work – which are to expose another level of intrigue beyond the rather ridiculous official explanations of what happened that fateful day. It is my opinion that Dr. Judy Wood has set out a very clear case of what actually happened and provides an extraordinary case through the thoroughness of her investigation. She avoids theories, speculation and finger pointing and presents an enormous amount of evidence – including many incredible  photographs. Her main point, with which I agree whole heartedly, is that we need to establish WHAT happened on that day before we can begin to explore any further.

In this book Andrew exposes not only  that most people concerned with 9/11 are ignoring all the most relevant facts but that the degree of hostility towards Dr. Wood  by many “Gurus” of the so called “Truth Movement” leads one to the inescapable conclusion that the Truth Movement itself has been hijacked by those who wish, in the spirit of Orwell’s “1984”, to hide the Truth from us. I was astounded by most of the evidence that Dr. Wood provides and even more amazed that most of her evidence was being ignored or derided by many in the “Truth Movement”. So much is missing from all of the films that I have watched concerning the destruction of the World Trade Cetre Complex. The “Truth Movement” is drawing the conclusion that 9/11 was an inside Job from an assumption that the buildings where destroyed by a conventional controlled demolition. Dr. Wood  demonstrates conclusively that this was not the case and in all the time I have been investigating this event I have seen no real evidence to support the Demolition Theory only personal assaults on Dr. Wood  and Andrew Johnson.

There are many transcriptions of interviews with the Gurus of the Truth movement in this book, which may at first sight seem superfluous, as it is easy enough to gain access to the original broadcasts, but no. One quickly realises that setting it down on the page gives one more of a chance to review what is actually being said. It is really quite shocking when you really get down to it that these respected Scientists are simply trying everything in their power to “muddy the waters” and create confusion – in a most unscientific way. I kept thinking to myself “are these people really scientists?” And even “are these people really adults!” I think of particular relevance is the portion dealing with well known 9/11 Truther Ace Baker’s attempts to discredit John Hutchison and the “Hutchison Effect”. It is astounding to suggest that setting up a bogus experiment to show that it is possible to create an illusion with the Camera and dismissing all other criteria of a scientific experiment could be judged to have any meaning or value other than to cast doubt on the credibility of Ace Baker. Just think how many things you could apply that to. The Hutchison Effect  would obviously not be taken seriously if it was just based on film evidence – that would be like saying Ghosts must be real because we have photographic evidence of them or conversely that Ghosts can’t be real because someone once faked a photo. Baker’s attitude seems, a trifle unhinged but what is more astounding is that Jim Fetzer, a principal Guru of the Truth movement, sees Baker’s fake film as proof that the Hutchison effect is fake. This is mind numbingly weird to me.

All of the work contained in this book confirms that something is very wrong within the Truth movement. Jim Fetzer’s dismissal of the Hutchison Effect is crucial to understanding the meaning of the deception as the Hutchison Effect is central to an understanding of what went on 9/11. Most of the more enlightened people who I speak with are aware of the basic tenets of the 9/11 truth movement’s “Inside Job” theory – and its relation to the invasion of Iraq and Afghanistan and see that as a symptom of Greed and manipulation. A study of Dr. Wood ‘s evidence is bound to cause one to reach very different and far more grave set of conclusions – perhaps grave conclusions beyond your worst nightmares. The extent of the distortions that Andrew demonstrates in these articles leads one not only to conclude that something is very,  very wrong within the “Truth Movement” but that perhaps the whole world has been “hijacked” by the perpetrators of this act, that  Dr. Wood  describes in her lectures as a “9/11 The New Hiroshima”.

I have to admit I found 9/11 Finding the Truth a very exciting read as it really involves the reader in a very personal way. I found it immensely helpful also in demonstrating the skills of some of the people who set out to destroy and discredit Dr. Wood ‘s work and reputation. The part of the book that deals with the anonymous bet sent to Andrew is particularly uncomfortable to read and most helpful in guiding one through the process of dealing with a probable “disinfo” agent with a very high degree of training in Psychology.

In conclusion I would say that this book is of immense value to anyone who takes the future of this planet seriously. It is obvious that 9/11/01 was probably the most significant day in the History of the “Modern World”. It is not just an event in the past but an event of which the Truth  is only just beginning to dawn on us, as we wake up to the profound discomfort of truly understanding the World in which we now live.

I just finished reading all of “911 Finding the Truth.pdf” in about 8 hours. Your honesty and integrity is at 100%. Your writing style made it an effortless read. Thank you for exposing the Web-of-Control that’s out there, as well as strategies to navogate through it.

Having been awake only since June 2008 is bad enough; But, by being introduced by Alex Jones and others… I’m really playing catch-up.

A look at the key evidence at the WTC site which proves something extremely unusual happened.

Dr Judy Wood – Where Did The Towers Go? 9/10… by CheckTheEvidence

Richard D Hall’s 3D Analysis brings up more questions about the WTC Planes and what they really were. 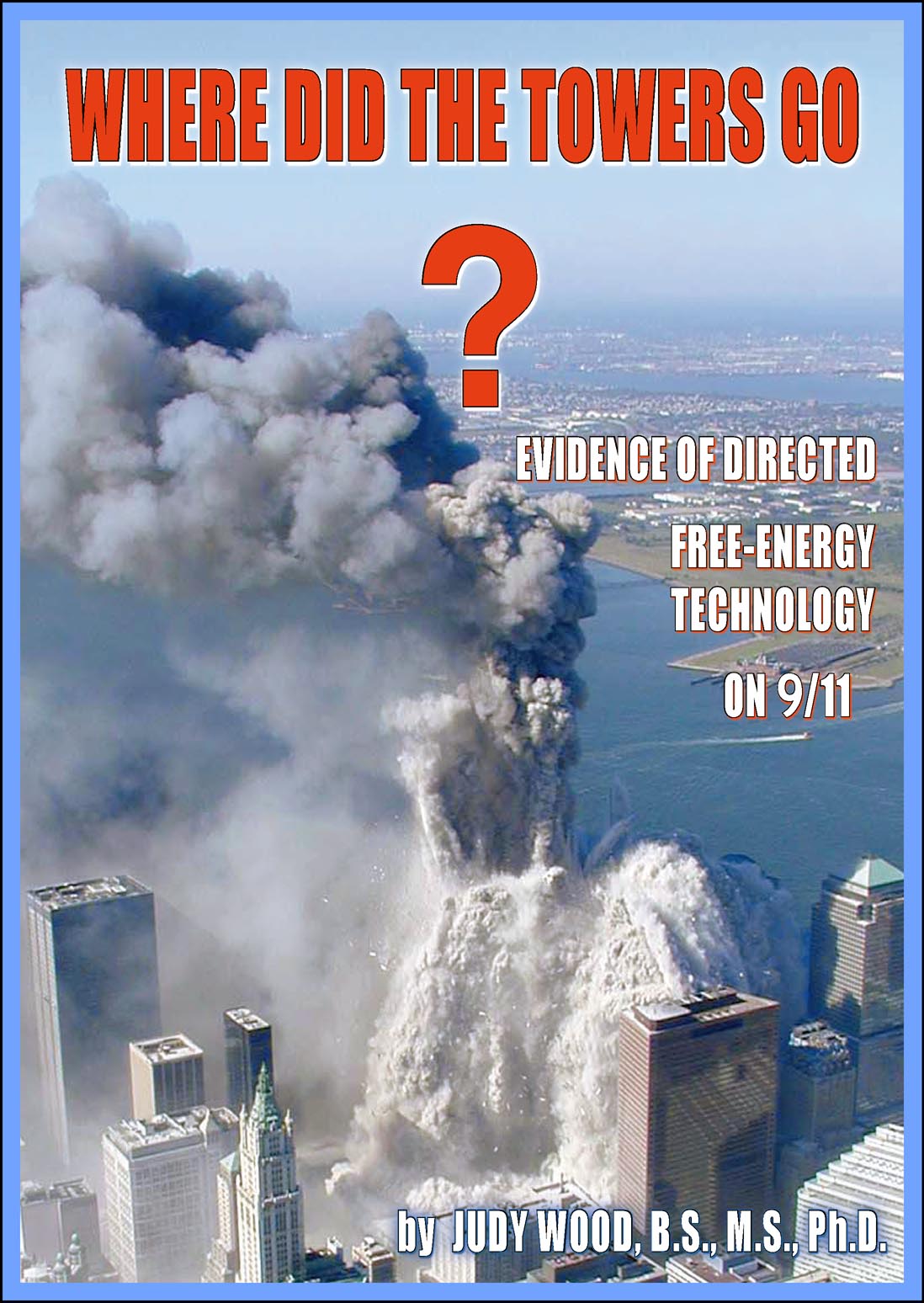