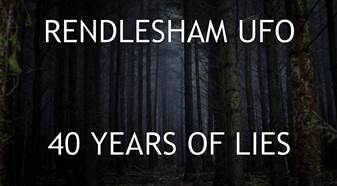 When trying to get to the bottom of an event, we often rely heavily on words that come out of people’s mouths. If physical, video or photographic evidence is lacking, eye witness testimony is often used to shape the public’s perception of events. For nearly 40 years, the public’s perception about the most famous UK UFO case in history has been shaped by a number of military witnesses. Many researchers have tried to build a picture of what most likely happened in dozens of books, films and ‘extended’ interviews. All of these researchers (including myself) have made fatal mistakes by assuming that one or more of the military witnesses have been telling the whole truth. Recent statement analysis on three key witnesses leads to a startling conclusion. There probably was no unidentified object on any night during the Rendlesham forest incidents. The whole scenario was most likely a tale manufactured by U.S. intelligence, intended to conceal details of a classified exercise or operation.