The removal of one of Truth’s Protective Layers?

What was the reason for the Moon Landing Hoax?

Documents have appeared in recent years which give more details about the US “MOL” programme and other formerly secret programme elements or spacecraft designs that were developed in the early 1960s. In this fascinating article, Adrian Evans explores the question of how and where the Apollo astronauts may have stayed in Earth Orbit, rather than travelling to the moon. (Also see my free book “Finding the Secret Space Programme”, where I cover the Apollo Scam in 5 different chapters.) 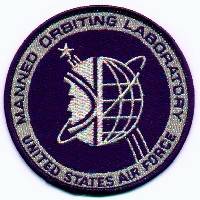 What did the Apollo Astronauts actually do in space if they never travelled to the Moon?

The film, A Funny Thing Happened on the Way to the Moon, by Bart Sibrel, clearly shows a “rogue” film clip of the Apollo astronauts in orbit, near the earth, preparing to fake the halfway stage of the Moon journey. Does the smallest piece of the puzzle, one of assumed inconsequential importance, give us the real answer and reason for the entire Moon Hoax deception?

Firstly, let’s put out the stall. If you are reading this, then you have either proven to yourself, that the Apollo landings were all faked, or you are wondering why they took such a massive risk to fool the world. For what gain, considering the embarrassment of being discovered? Obviously, there are the standard answers: to frighten the Soviets, with their reliable high technology, is one; to take the title and prevent the claim from going to the Soviet Union, so by stalling the Soviet Moon programme, is a second; and of course, thirdly, to fulfil the promise of the U.S. President J.F.K..

But I am going to put forward, a more rational, pragmatic reason: The Apollo “Moonshot” programme was a considered, global deception which was necessary in order to allow continued top-secret monitoring of the Soviet Union, its missile sites, and any potential nuclear launches during the Cold War (when tensions were indeed very high). This was additional to the need to create a permanent U.S. presence in space by which Soviet Satellites could be disabled or destroyed by astronauts, with the outside possibility of an actual space-offensive ability and with the possibility of more exotic classified weaponry, and conventional missiles, being open to conjecture.

The imperative need was military in nature – e.g. to replace and mitigate any further U2 Garry Powers incidents. The Apollo Moon launches were, in my opinion, actual cover for the Apollo M.O.L. programme (discussed below), and the covert surveillance of Soviet Union’s nuclear offensive capabilities.

The root of this proof is the 2015 declassified Gemini-B Manned Orbiting Laboratory information. Here is the description from the NASA site: 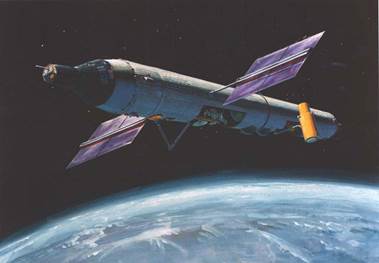 The Manned Orbiting Laboratory (MOL) was a joint project of the U.S. Air Force (USAF) and the ultra-top secret and unknown National Reconnaissance Office (NRO), to obtain high-resolution photographic imagery of America’s1960’s Cold War adversaries. Announced by Defence Secretary Robert S. McNamara in December 1963 and formally approved by President Lyndon B. Johnson in August 1965, the MOL Program envisioned a series of 60-foot-long space stations in low polar Earth orbit, occupied by 2-man crews for 30 days at a time, launching and returning to Earth aboard modified Gemini-B capsules. Externally similar to NASA’s Gemini spacecraft, the MOL version’s major modification was a hatch cut into the heat shield that allowed the astronauts to access the laboratory that was located behind the spacecraft without the need for a spacewalk. While MOL astronauts would carry out a variety of experiments, the primary payload intended to fly in the laboratory was a telescope with imaging systems for military reconnaissance. The imaging system was codenamed Dorian and carried the Keyhole KH-10 designation. Its primary mirror was 72 inches in diameter, designed to provide high resolution images of targets of military interest.

To reach their polar orbits, MOLs would launch from Vandenberg Air Force Base (AFB) in California, and construction of Space Launch Complex-6 (SLC-6) there was begun to accommodate the Titan-IIIM launch vehicle.[1]

They claim, that the only space launch in the MOL program occurred on Nov. 3, 1966 when a Titan-IIIC rocket took off from Cape Canaveral. The unmanned Gemini MOL entered orbit successfully and released 3 satellites. It also carried out 10 experiments, ranging from cell growth studies, to tests of new technologies. The MOL had an orbital life of 30 days, and decayed from orbit Jan. 9, 1967.

This one and only very advanced successful mission is open to dispute; I believe the extraordinary amount of money spent upon this totally secret Black Project/Programme could only be justified for a successful and desired military outcome; this would be for the defence of the USA against a first launch nuclear strike by the Soviet Union.

I believe that the Gemini-B MOLs were potentially made operational and then re-manned, as designed, after 10 or 12 days – for an orbit of 30 days in total. I believe this has not been admitted to officially, so as to continue the deception of the Moon landings. The natural progression to improve the design limitations of the Gemini-B MOLs and keep this capability resulted in the Apollo MOL solution. The Gemini-B limitations were as follows:

So, the answer was the Apollo MOL, a totally new solution which negated most of the original design and financial investment of its predecessor. Accordingly, this would be at an enormous expense, beyond the Black U. S. budget already spent on the Gem in-B version. The design and cost of a successful Moon Landing project was subverted to achieve this, probably because it was soon realised that any Moon Landing was technically impossible at that time.

The Apollo MOL would now be a separate unit, without an orbital rocket motor, but with a new improved re-usable docking point with an air lock possibly at both ends. The new Apollo astronauts’ capsule would sit conjoined, above the new orbital rocket propulsion unit (the Apollo service module); as a conjoined independent unit it would later dock with the MOL at the capsule’s nose after launch. In other words, the MOL would secretly replace what should have been the Lunar Lander or LEM, in the full-size Apollo rocket. 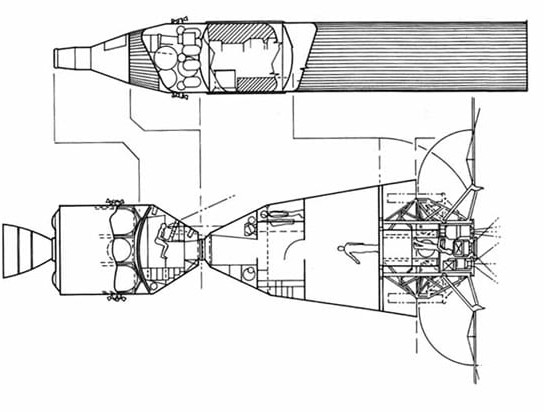 One question never asked – to my knowledge anyway – was if they didn’t go to the moon, did they actually have a Lunar Lander in the Apollo rocket? I’m going to suggest that they didn’t because the weight and value was obviously unnecessary. I’m going to suggest it was possibly replaced, in the first trip, with a specialised MOL unit with an emulated LEM interior constructed. This interior would be seen in later transmissions. It could also be reused if necessary, with later fake Moon shots capsules docking up to it.

The actual footage of the Apollo docking to the MOL could be transmitted to the public, as if it were the LEM and not a MOL – the manoeuvre being exactly the same. Instead of taking a LEM to the Moon, the MOL could now be repositioned in any orbit and at any distance from the Earth, using the large amount of the fuel available in the Apollo Service module and, therefore, evading any tracking; it would provide an effective space station from which live fake audio and visual transmissions could be sent back to Earth in comfort.

Future Black military launches could provide an opportunity to dock MOL units together with different operational capabilities. It would probably make sense to provision two docking points at all times, in the form of a combined MOL, to allow for safety and to allow for 2 Apollo capsules to dock simultaneously, with a multi-unit MOL, for emergency reasons. See www.defensemedianetw… 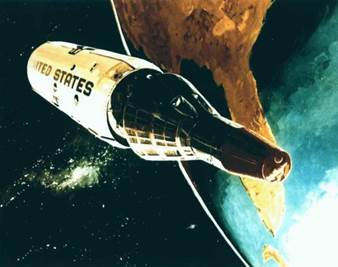 Effectively, the Moon budget was used to provide a fully operational manned space observational post with potential offensive capabilities, which would warn the US of a pending nuclear first strike from an enemy. The only unwanted piece of equipment created in the budget would be the fake Moon Landers (which would eventually be sent off to museums).

The MOL orbiting space platform was especially of value: the signing of the 1967 Outer Space Treaty banned the stationing of weapons of mass destruction (WMD) in outer space. This is commonly understood to include nuclear, chemical, and biological weapons. More exotic weaponry, or conventional rocket intercept capability from a manned space-station, would not be in violation of this agreement. In addition, further claims (on the internet) from researchers may suggest that the early 1960 proposal for the system known as the Satellite Inspector for Space Defense programme, which allowed for the inspection and an offensive attack opportunity against enemy satellites, could easily fit into the Apollo MOL solution. During this particular time, the Vietnam war was also underway, whereby detailed space photography of North Vietnam, would have been additionally, highly valuable.

The well-tried and tested, Apollo docking solution was finally used with Apollo–Soyuz space-station in July 1975. It’s probable that the Apollo MOL solution, by this stage, had been superseded by more advanced satellites. The 1972 launch of Apollo 17 being the final claimed Moon landing. Though military launches to man the MOL space station may have continued after this point for some time.

Consequently, the astronauts supposedly sent to the Moon, were undertaking a top-secret Black Programme of National Defence, which was extremely hazardous. Their return included 2 weeks in isolation, for quarantine reasons, but was probably for debriefing the real mission and to prepare their cover story, which they were duty bound to stick to. Perhaps this explains their reluctance to talk about their achievements so freely?

“Fellow astronauts, ladies and gentlemen, Wilbur Wright once noted that the only bird that could talk was the parrot, and he didn’t fly very well, so I’ll be brief.”

Well, a parrot repeats only what it’s trained to say, and the popular idiomatic phrase ‘parrot fashion’ means to follow a script at all times. Most species of parrot spend much of their time just perched in the tree canopy. Perhaps this could allude to the distant atmospheric and magnetic canopy above the earth. It may well explain his comment.

Unfortunately, the cover story of manned trips to the Moon has become “a monster” in its own right, preventing the disclosure of the astronauts’ real objective – which is now just of historical interest.

It seems that the U.S. military seriously overestimated their future abilities, whereby they had probably expected to have succeeded in landing a man on the moon, within a reasonable time-frame, and make light of the previous fake landings by creating a moon-base or such-like.

[Editors Note: The NASA Article on MOL, linked above, states that MOL astronauts were transferred to other programmes in August 1969 when MOL was cancelled…] 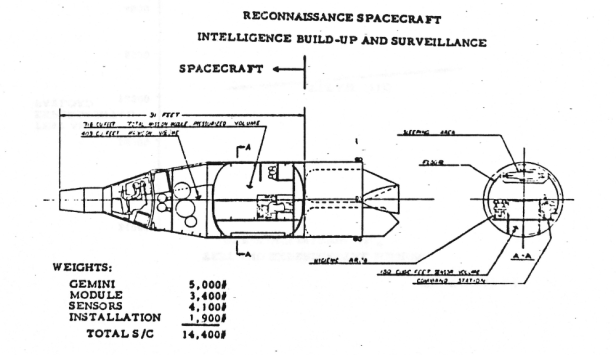