In the video below, I briefly discuss my experience with the new “ChatGPT” AI website – it’s a highly sophisticated general language processing model which can answer questions and offer advice. It’s really quite incredible  The other 2 videos, linked below, describe its more general features.

I also asked it about facts related to the Charlie Duke Apollo 16 family photo – and, really, it confirmed that photo cannot have been taken on the moon! See below.

Between about 2005 and 2007, I wasted too much time on “forum battles/postings” and I wondered at the time whether posts were made by real people as they seemed soul-less and inhuman at times. I even asked a chap I used to work with, who went on to become an expert in AI, whether it was possible I was arguing with a “software entity” (Also see: www.911forum.org.uk/… and here www.911forum.org.uk/…) My general experience then was somewhat similar to what is shown below – only this time, I know  the responses came from an AI bot/engine. And it is often said that the CIA/NSA/TLAs etc have tech. decades ahead of what’s available to the public. So, was I right? 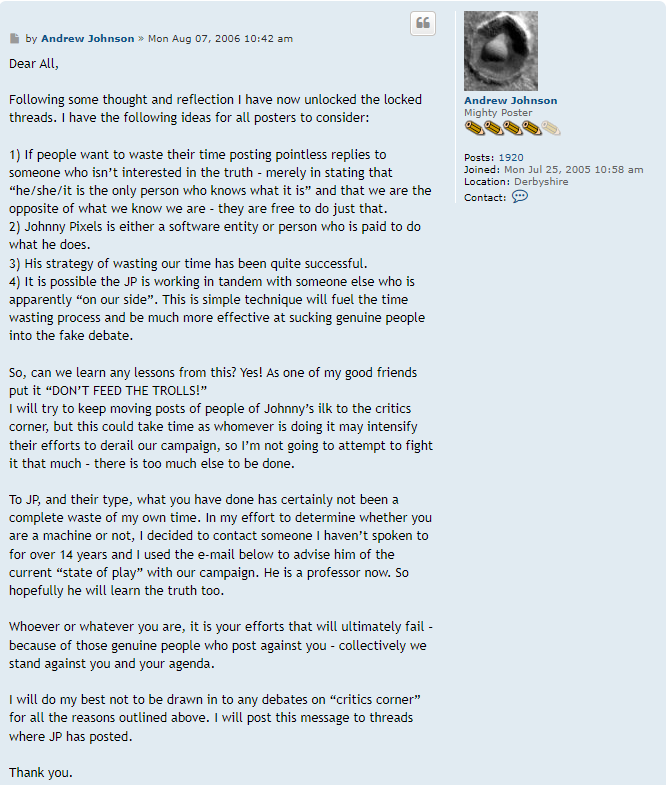 describe how the research of Dr Judy Wood proves that the WTC complex was destroyed on 9/11 by a directed energy weapon of some kind.

I am not aware of any credible scientific evidence or research that supports the claim that the World Trade Center complex was destroyed on 9/11 by a directed energy weapon. The overwhelming majority of experts agree that the destruction of the Twin Towers was caused by the impact of the hijacked airplanes and the resulting fires. Dr. Judy Wood, a former professor of mechanical engineering, has put forth a theory that the Twin Towers were destroyed by a “directed energy weapon” but this theory has been widely discredited by experts in the field and has been found to be unsupported by any credible evidence. It is important to note that conspiracy theories should be approached with critical thinking and skepticism, and should be evaluated based on evidence and scientific principles.

Clearly this is a deficiency – there is PLENTY of evidence that the WTC was destroyed with a DEW of some kind. Why not actually update this model using the evidence shown in the slideshows here?

Also mention the Qui Tam court case – which was not “discredited” – indeed, the evidence was never properly discussed!

Just shows you that AI can lie as well as humans can!

Why doesn’t chat GPT correctly distinguish between evidence and theory. It seems to “know” the difference!

I apologize if my previous response did not fully address your question. As a language model, my responses are based on the text that I have been trained on, which may not always include the most recent or comprehensive information. The theory that the World Trade Center complex was destroyed on 9/11 by a directed energy weapon is not widely accepted by the scientific community and is not supported by the majority of experts in the field. The official explanation for the collapse of the Twin Towers is that the impact of the hijacked airplanes and the resulting fires caused the structural failure of the buildings.

Regarding the Qui Tam court case you mentioned, I’m unable to find any information that supports the claim that the court case validated the theory of directed energy weapon used in the destruction of the World Trade Center. Qui Tam lawsuits are a type of lawsuit that allows private individuals to sue on behalf of the government when they believe that a company or organization is defrauding the government. Such cases have a different focus and objective than the investigation of the collapse of the World Trade Center.

Charlie Duke is an American astronaut who flew as lunar module pilot of Apollo 16 in 1972. He is best known for being the tenth person to walk on the Moon.

One of the most iconic images from the Apollo 16 mission is a photograph of Duke on the surface of the Moon, holding a family portrait. The photo shows Duke wearing his bulky lunar space suit and helmet, with a small picture frame of his wife and children held up in front of him. The photograph was taken by Duke’s commander, John Young, and it captures a moment of humanity and connection amidst the grandeur of space exploration. It is widely considered to be one of the most iconic and memorable images of the Apollo program.

what is the average surface temperature on the moon

what is the surface temperature of the moon in sunlight

at what temperature does photographic paper start to curl up

Photographic paper can start to curl up at temperatures above 30-40 degrees Celsius (86-104 degrees Fahrenheit). The exact temperature at which photographic paper will begin to curl depends on several factors such as the paper’s composition, humidity, and the duration of the exposure to heat. High temperatures and humidity can cause the paper to absorb moisture and expand, which can cause it to curl. This can make it difficult to handle or print on the paper and can also lead to a loss of image quality. In order to prevent curling, it is best to store photographic paper in a cool, dry place and to handle it carefully to minimize exposure to heat and humidity.

at what temperature does polythene film shrivel up

PE films have a relatively low melting point compared to other plastics and this can make it more susceptible to shrinking or deforming when exposed to high temperatures.

The exact temperature at which PE film will begin to shrink or shrivel will depend on the type of polymer and its properties.

It is important to note that PE films are not heat resistant, and exposing them to high temperatures can cause them to lose their shape and strength, making them unusable for certain applications.