I received the text below in an email from a reader/viewer called Gareth who lives in Derbyshire, UK. He has recently “woken up” and he has seemingly watched a presentation I compiled about 12 years ago or more – see www.checktheevidence…

I thought I’d write to you with what I’ve witnessed and discovered and see if it fits with your knowledge and if you think it is worth a revisit for the sake of 9+ year olds who are being given this stuff with no idea what they are being tricked into. This also looks like a possible route to mandatory vaccinations, as happened for this in California.

As of a week ago I knew of HPV, I knew it was being pushed on boys, with no logic. However, it is now being given in schools, like the COVID jab was, also like the nasal flu spray. The school I know of is John Port Spencer Academy in Etwall.

I’m trying to understand further and maybe spread the word about the latest version HPV jab, Gardasil 9. The old Gardasil Quadrivalent was bad enough by the evaluation of UK Column in 2018 and seemingly by your mention of it from 2010. A five-minute search tells us the actives in this new version are made using r(DNA) technology, circled on attachment 213800.  However, this one has 9 rather than 4. This is Recombinant DNA, defined as ‘gene therapy’. I had no idea we were using gene splicing technology on substances being injected into our vascular systems. How can this be informed consent when you have to look for it in small print and then cross reference it? We can’t put a GM potato in the ground, but can do this to our kids! And sadly, most of them are having it because they are told it is a cancer risk when there is no evidence it even works! It seems Gardasil 9 was fast tracked through trials and the death rate on the clinical trials was 1 in 750ish people. But they said this was normal for the demographic and not surprisingly the deaths were attributed to suicides, car accidents, drug overdoses etc….

Gene therapy aims to treat/cure/prevent disease by replacing a defective gene with a normal one using recombinant DNA technology. Most human clinical trials in gene therapy are still in the research stage with only over 400 trials conducted in about 3000 patients in order to treat for single gene disorders, cancers, and AIDS. Scientists agree that this is the most powerful application of rDNA technology, but have been cautious in its application due to associated risks as exemplified by the case of Jesse Gelsinger (see Chapter 4: Recombinant DNA Technology and Genetically Modified Organisms).

Not until I really looked hard I seen any “truth doctor” mentioning this, and none in this time frame, which is surprising as they should be all over it, in advance, after the latest “scamdemic,” but as with C19 – most came to, or were ushered into the party too late to effect the numbers who took it. An example being myself who took 2 AZ (Astra Zeneca) before finding out about it, of my own volition, but thankfully timely enough to stop my son from getting the COVID jabs, unlike most of his friends who have had 3 now – at age 13.

Also note, boys are being told they should get Gardasil 9  too, despite not having a cervix! They’ve been using the ‘protect granny methodology.’

I’m sure the death of Jade Goody did not go unnoticed to you, sadly she died in March 2009 from Cervical cancer with unending media coverage. This Gardasil stuff originally came out 2008 – the same year she was diagnosed. After her death, her husband said, ‘if only the jab was available sooner she would have been saved’. Either a very sad coincidence, or some might say satanic marketing, who knows.

This is pretty much all I’ve found in the public domain from a surface look, which was my aim, to see what a parent might find. They won’t find anything in the mainstream and will need to go to Odysee and 15 pages down in google, and will only understand this drug if they have enough intelligence to decipher the jargon and read between the lines.

To a ‘soccer mum’ this is portrayed as being “vital to protect against cancer” and has “no risk,” because “the first 100 results in google tell her so…” So here’s some additional info. 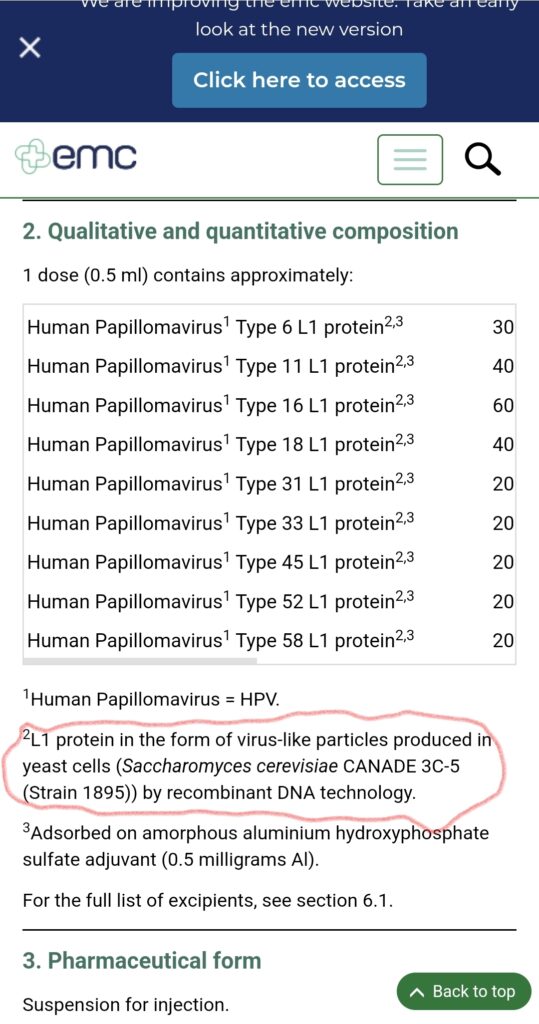 So why write to you? I feel this is going through while everyone focusses on COVID, but there is another prong in the fork of the eugenicists. I have written to a few people but with less detail, typically successful truth celebrities often act like the MSM. They have narratives in mind and are not reactive to news if it won’t quench the thirst of their audience or risk a strike, as many rely only on their social media income, which is a huge truth trap in my opinion.

In this case, we are jabbing a dangerous genetic so-called vaccine into kids, so why did COVID outrage everyone, but this one doesn’t!!! Does the public not have the capacity for a multi-faceted attack? Does the truth community have the same limitations?