Recently, James P alerted me to a new story about the Asteroid/Dwarf Planet called Ceres. This new story, published in “Newsweek” in Jan 2020 is discussed below. 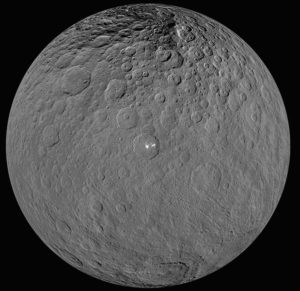 You have probably noticed the bright dots in the centre of the image above – and, in Feb 2015, stories appeared about these, as NASA’s “Dawn” Spacecraft had just photographed them. One such story, titled “Ceres ‘Lights’ Baffling NASA: What Is Shining On Dwarf Planet’s Surface?” appeared in the Huffington post. Whilst giving some useful information, it contained the following tiresome, unreferenced statement:

It has been speculated that the lights might be reflections from ice, or maybe evidence of volcanic activity. UFO hunters think it means Ceres is the Death Star.

I contend that this sort of “UFO hunters” or “UFO believers” statement is immediately put into the press and media to begin a perception management process, which makes serious academics, scientists and investigators hostile to the sort of conclusions and comments I (and many others) have made in books like “Secrets in the Solar System”. Those conclusions can be summarised thus:

Some evidence gathered by NASA suggests that the Solar System may have a very different history to that which mainstream science assumes. I contend that there is evidence of archaeology, not just geology, on other bodies in our Solar System.

Does this latest story about images of Ceres add any weight to this conclusion?

The Newsweek story, titled “AI Finds ‘Square Structure’ Inside ‘Triangle’ On Ceres, Failing Experiment To See If It Could Be Used To Find Aliens” is interesting to me for several reasons.  The actual NASA image, of the Occator Crater on Ceres – which was central to this story – was obtained by NASA some time in 2018, near the end of the “Dawn” mission. It is a “close up” of the “white dots” seen in the image above. It has been subjected to a “new” process or study, which we will discuss later. First, let’s discuss the image. 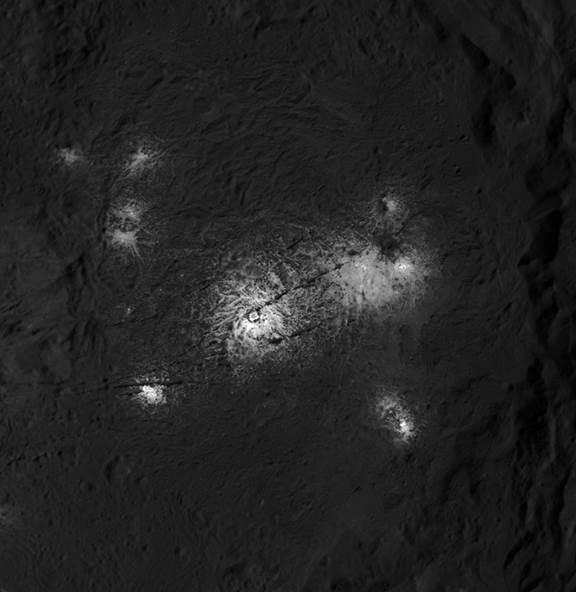 This image of the Vinalia Faculae in Occator Crater on Ceres shows deposits of light-colored salts intermingled with darker, older terrain.

Just looking at the image, we immediately see several things:

The Newsweek article helpfully includes some “zoomed” in portions of the image: 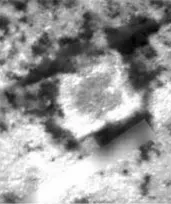 This shows the central bright point in more detail and seems to show that the feature is, more or less, square in shape. Further, the article notes a less obvious feature of the image – the square may be sitting inside a triangle, as illustrated below: 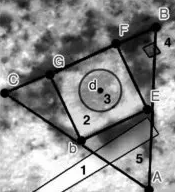 It is not too difficult to find a high-resolution version of this image, from which these cropped portions were taken.

The Newsweek article reports that the image above has been processed using some software which is designed to detect patterns in the image (using “Artificial Intelligence” – AI). As an aside, AI software is, by and large, concerned primarily with pattern matching (something the human brain does very well indeed). As already stated above, the article reveals and highlights interesting image features, but then states:

De la Torre says the findings suggest AI may not be a useful tool in the search for extraterrestrials. He said that while AI has “a multitude of applications,” it could end up confusing us with “false” detections. He added that what the square structure actually is unknown, “but what artificial intelligence has detected in Vinalia Faculae is most probably just a play of light and shadow.”

The man quoted, Professor Gabriel G. De la Torre is a Clinical Neuropsychologist and Human Factors Specialist at the University of Cádiz in Spain, he has had a paper published on the AI image analysis. (The story appeared in several other places – such as the UK’s ubiquitous “Metro” newspaper.) De La Torre is not a planetary scientist nor is he a geologist. Hence, all he can do in his paper, titled “Does artificial intelligence dream of non-terrestrial techno-signatures?” is comment on what a computer program/ piece of AI software does with the image. The Newsweek article also relates how De la Torre’s paper compared volunteers’ detection of patterns in the Ceres image with the AI detection, and states:

The participants and AI were presented with an image of Occator and asked them to pick out any geometric shapes they could see. Both humans and the AI identified a square shape in the image, but the AI also saw a triangle shape around the square. When the participants were shown the triangle, most claimed to be able to see it.

It appears that the underlying message in the article is the same one I encountered in 2004, when I challenged a few geologists to comment on the obviously anomalous Martian dome image, discussed in the SITSS book, linked above. It is the same old “Pareidolia” argument – which implies that both humans and AI software are “detecting patterns which aren’t really there” or “aren’t significant.” The Newsweek Article states:

While these bright spots are most likely volcanic ice and salt emissions.

However, it does not elaborate or give any references for this statement. What exactly is “volcanic ice” (it sounds like a contradiction in terms to me – what with volcanoes being very hot and ice being… um… cold, like.) And what shows the emissions as being salt? Is this good old NaCl? We aren’t told…

De la Torre’s statements appear to be at odds with what Dr Mark Carlotto concluded in his paper which, 30 years ago, studied the so-called Face on Mars. The abstract for this 1990 paper, titled “A method for searching for artificial objects on planetary surfaces” echoes themes in de La Torre’s recent “AI” paper. Carlotto writes:

The focus of the search for extra-terrestrial intelligence has been to detect radio frequencies emanating from outside the solar system for signs of intelligent life. This strategy is consistent with current information which suggests it is unlikely that intelligent life has evolved on the other planets in the solar system. However, the possibility that extra-terrestrials or their probes may have reached this solar system cannot be ruled out. If so, they may have altered planetary surfaces in ways detectable by remote sensing. An alternative strategy is proposed for a systematic search for anomalous, i.e., possible non-natural objects on planetary surfaces. An approach for detecting anomalous objects in planetary imagery based on the fractal modeling of planetary terrain is described. Viking orbiter imagery suggests that certain objects on the Martian surface currently under investigation may not be natural.

Does this support the hypothesis that “For every PhD there is an equal and opposite PhD…?”

What irks me here is that the Occator Crater image evidence itself is not really analysed in anything other than a superficial manner. Whilst the triangular feature is noted, the additional 3 bullet points I listed, after a brief inspection of the image, aren’t explored. (I bet most people could find a few more if they studied the image for 30 minutes). The positional association of the square pillar with the central bright spot is not explored. Neither is any meaningful reference made to the 2015 “Dawn” image (shown above), which shows the bright spot as being quite central in the Occator crater. Rather, it is suggested to the reader that there is nothing really very significant about this image. This is really contrary to one’s first reaction to the image – which is surely what propelled it into the press and media in 2015. This is exactly what happened with the “Face” image on Mars.

Overall, then, I view the Newsweek article as just being another instance of Public Perception Management of the most interesting data and evidence which has been returned by multi-million-dollar missions. “Nothing to see here folks!”