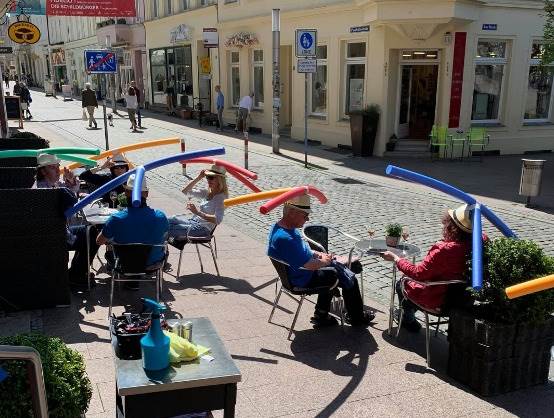 As Lockdown Measures are supposedly eased, Watch out for Helicopter Heads!

Lord Sumption and a pretty despicable BBC talking head – trying to imply he might not be following the guidelines.

“On 28 April Public Health England, the executive agency of the DHSC, decided to add every death in the UK to occur in a care home or otherwise outside a hospital since 2 March 2020 to its newly reconfigured website publishing the official count of COVID-19 deaths. At a single stroke this decision — which supersedes the ‘new way to understand whether COVID-19 was involved in the death’ announced on 10 April, and whose flawed criteria we looked at above — added a further 4,240 deaths, raising the total UK deaths to over 26,000, surpassing the count in France and even Spain, and closing in on Italy. The same day the Department of Health and Social Care announced that all such deaths will from now on be recorded as COVID-19 deaths. According to what the DHSC calls its ‘official statement on the changes in reporting’, which is published on the ONS webpage on ‘Different uses of figures on deaths from COVID-19 published by DHSC and ONS'”

Includes:
“Office for National Statistics and the Care Quality Commission issued a joint transparency statement clarifying that their recording of a death as being the result of COVID-19 ‘may or may not correspond to a medical diagnosis or test result, or be reflected in the death certification.” (since 28 April, apparently). (My highlights).

This shows how far advanced tracking and logging of Indian citizens in a vast database has become. I don’t trust Corbett and he misses out an important word in his commentary when describing the COVID Crisis – that is “manufactured.” It’s all very well exposing Gates, but one shouldn’t ignore the evidence the whole thing is manufactured (which is in keeping with Corbett’s wilful ignorance of 9/11 evidence).

The program sought to send test kits to the homes of people both healthy and sick to try to bring the country to the level of testing officials say is necessary before states can begin safely reopening. The program, which had already gone through thousands of tests, found dozens of cases that had been previously undiagnosed.

Douglas and a couple of others sent me this.

This is a fairly wide-ranging discussion but perhaps the most interesting part is at about 54 mins where Bush argues that flu outbreaks are due to an increase in  atmospheric CO2 – due to the reduction in foliage at this time of year.  His message at the end is also good.

The opening section is especially revealing regarding what I might call “the rise of modern vaccination policy.” Lots of other interesting discussion too.

Edward Ted J. “Ted” Steele is an Australian molecular immunologist with interests in virology and evolution. He is an honorary research associate at the C.Y.O’Connor ERADE Village Foundation in Piara Waters, WA, Australia. He joins Economist John Adams and Analyst Martin North in an extended interview exploring COVID, its possible origins, propagation and risks.  How do our current responses stack up?

Also, disturbing legislation is being put through their parliament – in common with other countries.

Which brings me to:

But I don’t know its name

That people from bad homes

Do again and again

Full of tension and fear

They do it over there

And we do it over here

Fascism, turn to the left

Fascism, turn to the right

We are the goon squad and we’re coming to town Beep-beep, beep-beep Listen to me, don’t listen to UK Column Talk to me, don’t talk to Andrew Dance with me, don’t dance with Richard No, beep-beep There’s a brand new talk But it’s not very clear, oo, bop That people from good homes now Are talking this year, oo, bop, fascism It’s loud and it’s tasteless I’ve not heard it before, oo, bop Shout it while you’re dancing On the dance floor, oo, bop, fascism Fascism, turn to the left Fascism, right Fascism We are the goon squad and we’ve come to your town.